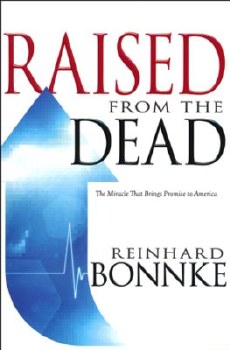 Raised From the Dead by Reinhard Bonnke

As Reinhard Bonnke debated whether or not to move his ministry to America, he did something he had never done before: he prayed for a sign to confirm that God was truly calling him to go to America. God was about to answer that prayer.

A few days later, a woman brought her husband to the Nigerian church where Bonnke was preaching, in hopes that his partially embalmed body would be raised from the dead after three days in a coffin. Although Bonnke was unaware of this and never even prayed for the man, the woman's husband, lying in the church basement, began to breathe again during the sermon. In front of thousands of witnesses, this man, who still couldn't move because of rigor mortis, was raised back to life. After his message, Bonnke was beseiged by a crowd yelling, "He's breathing! He's breathing!"

This incredible miracle, now detailed for the first time, is part of a movement of God birthed in a small African church, and stretching around the world to America. It is the beginning of a work of God that will confirm His word to Bonnke: "America will be saved."

This product has not yet been reviewed.

Please login or register to write a review for this product.